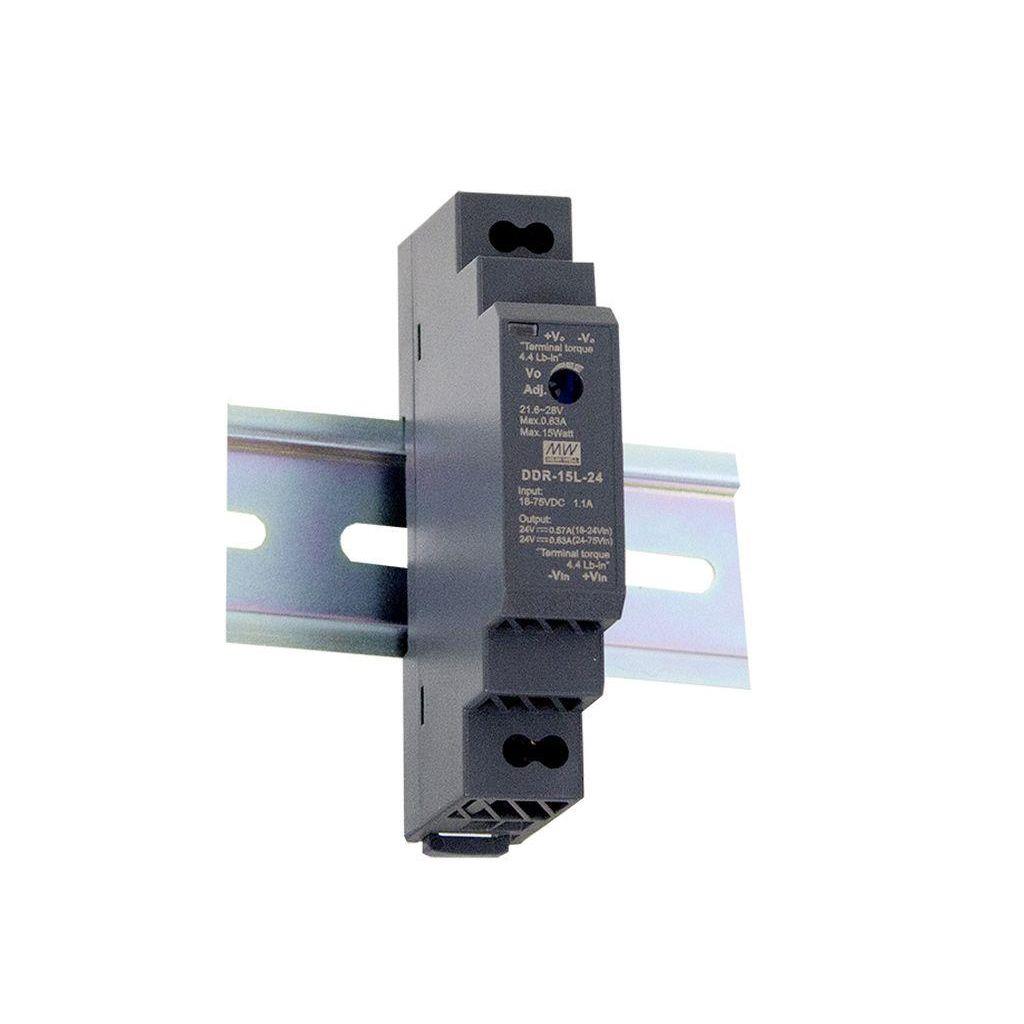 Home automation systems like Loxone do require 24V DC power supply. In most cases the infrastructure is fed by one separate PSU unit, which has some kind of power outage protection (UPS, either on its primary side AC, or the DC side), and is separated from the other high-consumption components (like LED strips, valves, locks, blackout blinds). This may obvious vary based on the actual infrastructure setup, but the situation I want to tackle here is the fact that good portion of various good sensors is not usually designed for 24 Volt. For instance, you can find nice and great indoor PIR sensors for 24V DC, but in case you want to have these combined with glass break detectors you’re most probably out of luck. Same with outdoor PIRs and stuff like sirens and gongs.

I have been trying to avoid situation where I would have mixture of devices for different voltage inputs, and the corner case scenarios were always solved by simple constant voltage regulator and two capacitors which made the trick and allowed me to supply 24V info 12V device. As an example, I did this conversion for the soil moisture sensor as I described earlier.

As soon as the number of 12V devices grows, it might be probably more efficient to create a separate 12V circuit line for feeding these “lower” voltage components. I am not entirely happy about combining multiple voltages in one setup, but there are cases where this mixed approach makes probably more sense. At least you can avoid the necessity of having multiple local voltage regulators built in the 12V devices itself.

To wrap-up this part

Having separate 12V DC power supply unit might be a solution for cases where you either do not care about what happens in the event of power outage or you do have regular AC power line UPS. Hooking an additional power supply for 12V is the easiest thing to do.

But what if you use 24V DC UPS with batteries that are already fully protecting your 24V circuit? Here the option is to use DC converter which will make your desired 12V from the 24V default on input. Is this efficient and is there anything you could attach to the DIN rail? Let’s have a look.

For this test and comparison I have purchased DIN Rail type DC-DC converter from Mean Well. The 12V version (model DDR-15G-12) has the input voltage range from 9-36V, and the output is always 12V with the possible adjustment +/- 10%. You can draw 1.25A maximum out of it which equals 15W max. Please refer to the datasheet for more details.

The aim here is to understand the efficiency difference between voltage regulator and this converter. What is the idle power consumption and how the efficiency correlates with increasing the load.

For my quick measurements I simply wired this device on the table.

To make a realistic comparison, I have also prepared the simple and basic wiring for Voltage Regulator MC78M12CT on my breed board, which is a good example of what can be used to for built-in voltage conversion for devices that require 12V but are powered with 24V. It consists of two capacitors and the regulator. Maximum output current, with adequate heatsinking is 500 mA. The maximum operating temperature can reach up to 150°C, so for any applications with higher current a big heating would be necessary. We will talk about that below.

If you’re not interested to read the full details, just skip to the conclusion which will (most probably) summarize the expected result.

When attaching very small load the differences are very small between the voltage regulator and DC-DC converter. As an example of a load (to make this less fictitious) I took one PIR sensor with glass-break detector called Satel Navy. This device is designed for 12V and as far as I know they do not provide any similar type for 24V. This Satel sensor takes 6.16mA when idle, and 9.45mA when a motion is detected and the red LED is lit.

The more you draw the bigger the difference will be. I used pieces of an old 12Volt LED strip to simulate bigger load. The Voltage regulator got very hot just few seconds after I asked to deliver 313mA. That was expected outcome and if you look at the chart below there was no need to go beyond this point. The message is clear I think. I just measured few lower points with smaller current to indicate the trend.

As you can see, the energy loss differs when delivering 313mA is 3.4W when using DC-DC converter and 6.5W when using voltage regulator. It is almost twice as much.

From purely energy efficiency perspective the DC-DC converter makes more sense everywhere where you have more than one sensor (or small consumption device) to power. With increasing load the linear voltage regulators energy loss and heat dissipation creates a need for larger heat-sinks and the whole circuit design becomes very inefficient.

So the voltage regulator is ideal for built-in modification of an existing low power device, however the moment when you have more than one of such tweaked devices it starts consuming more than if you would use DC-DC conversion for that dedicated 12V circuit.

Economically, the costs of the three components to run linear voltage regulator is around 1 EUR. But you have to know-how to put these things together, considering the circuit design inside of some purchased device you need to break in, and the warranty which is likely to void in your hands. The MeanWell DC-DC converter model DDR-15G-12 costs roughly 16 EUR. It is DIN mount unit which can be easily integrated into the cabinet without the need to modify the devices in the end. The only thing to pay attention to is to have clearly marked the 12V circuits from the 24V to avoid any confusion!