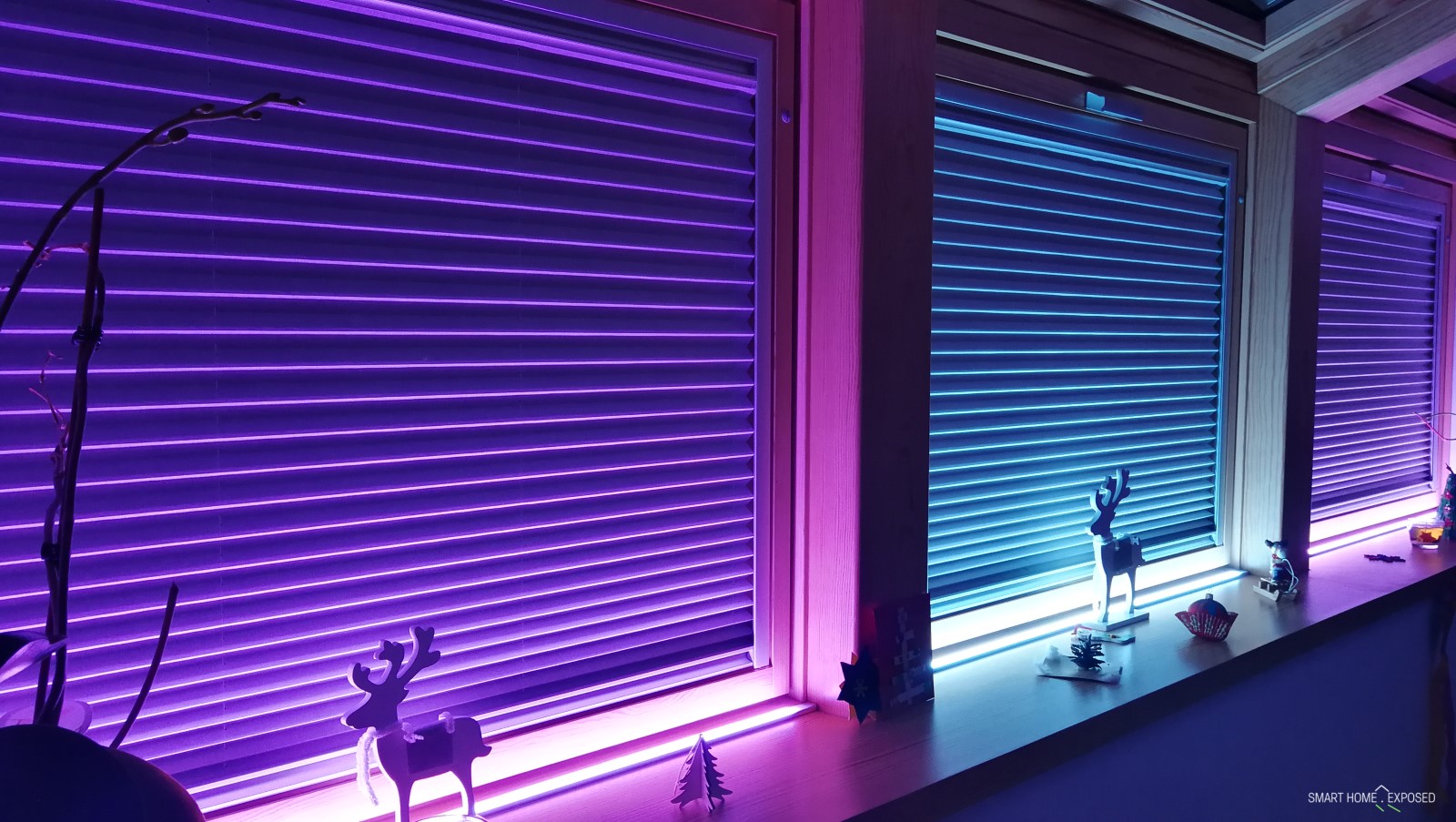 Some of you might already noticed that Loxone silently discontinued few  products and one of the areas impacted are DMX products. Just a simple query to their web-shop reveals that there are no 24V DMX Dimmers any longer. The focus has moved towards Tree and Air products, leaving open standards aside. Same happened to EnOcean products while ago.

But there might be other reasons why to look for other 24V dimmers as well. Before we jump right into it, let me tell you few things about the former Loxone 24V DMX dimmers. I still have 6 of these since the very beginning of my Loxone installation, and I never had any technical issue with these. They have very small space requirements in the cabinet on the DIN rail, and offer four channels at 2.1 Amps each (50W per dimming channel). But the thing here is flickering, which is often being discussed in relation with PWM dimming in general. According to the documentation, Loxone has set the PWM frequency to 123Hz. Although there were some rumours about the possibility to adjust the PWM frequency, in the end it seems it was not possible.

Different people do have different sensitivity to flickering. While some do not notice flicker at 25Hz (cinema movie frame rate) or lower, others might be irritated by 100Hz refresh or higher. It depends entirely on the application and human eye natural sensitivity to flicker. It is more recognizable when subject or object is in motion, and in peripheral view where the sensitivity is improved. Some sources report that 300Hz is a frequency minimum for stationary and 1kHz for moving flicker free.

How about some upper frequency limitations? It is usually limited by the micro-controller maximum frequency, switching transistor energy efficiencies at higher speeds, and potential audible noise in the human sound spectrum. At ultra high frequencies the system would practically act as an transmitter creating electromagnetic interference all around the house.

Now back to the Loxone dimmers for a moment again. In my experience the frequency they have chosen is a bit too low, causing unwanted stroboscopic effect. It is interesting that in case of RGBW LED strips I found the flickering more noticeable on the color channels than on the WW, but this has either something to do with the response of phosphor coating that converts the blue emitted light to the white or warm white, human eye sensitivity to the given wavelengths, or combination of these factors. Simply wave your outstretched hand in front of the light source and see the difference in stroboscopic effect when switching the light channels.

For home light appliances it is wise to consider flickering (or the PWM frequency) as another attribute to look at when comparing LED dimmers.

I heard very good references to Eldoled LINEARdrives (100D), which seems to be very advanced, flicker-free and solid dimmers. However, I couldn’t find any good dealership nearby, so I cannot provide any personal recommendations. Also, when looking at the available datasheets, there is no mention about the frequency they use, or at least I couldn’t find that detail there.

So while looking for other options I found few interesting DMX dimmers on AliExpress so I ordered a few to test.

This is indeed an interesting product at first sight. Offering 24 individual output channels, 3 Amps each, DIN rail housing and numeric LED channel display. It offers some standalone operation modes making the device more versatile to use but I was not exploring these in detail as my primary target was to supplement Loxone 24V DMX dimmers. There are three buttons that allow you to configure or adjust few settings like operation mode, DMX channel,  decoder mode, PWM frequency, brightness curve, and few others).

Decoder mode can be selected between 1, 3, 6 or 24 channels, PWM frequency can be selected to either 500Hz or 2000Hz and you choose from linear or logarithmic output curve. DMX address can be set in a range from 001 to 2048, however Loxone DMX extension cannot address more than 512 channels I think, but definitely no limitation there from the dimmer.

The fact that there are 24 individual output channels sounds amazing, and was the main reason for me to test it. When looking at the documentation I got the impression, that in facts there are two independent sets of channels with 12 outputs on the top and 12 on the bottom side of the device. That thinking was supported by the wiring diagram showing clearly, that the power supply has to be connected to the top as well as to the bottom. Unfortunately, things are a bit different, and my idea to connect two separate power supplies to each 12 channels was wrong. 🙁

Just a quick multi-meter exercise revealed that the power inputs are cross-connected on the board. That assumption was proved immediately after I opened the device. So the recommendation for separate wiring input is rather a reduction of the current the board has to carry,  because at full load we are talking about 72 A altogether, where half of that would be going through the PCB. So no wonder the manufacturer is trying to reduce the stress and strongly asks to supply the power from both (top and bottom) terminals.

But this opens another problem which is the power supply itself. In case you want to use the full potential of this dimmer and use that for instance as an DMX device for lighting of multiple rooms, the PSU would have to be extremely powerful ~1728W. This is a bit insane, not just from a single point of failure perspective, but also in case of any wiring/electricity issue, the short-circuit current would create massive firework, unless you are heavily fused on each of the channels.

I was also considering an option to cut and split the wiring on the PCB, so that the top and bottom terminals could have separate power, but then I would need to tackle other issue and that is the power for the DMX controller itself, where once the bottom part is off (if you are considering switching off PSU’s when idle), the whole dimmer gets off. So I ended up with different solution – see next chapter.

Where I see this product fits best is more an entertainment or effect usage where you need a lot of channels but the total current is kept reasonably low. For instance if you want to dynamically illuminate your steps on stairway and individually address each separate one, this dimmer is the right one to be used. To achieve the same using Loxone 24V dimmers you would need six of these.

Last note, this dimmer predominantly counts on the connection to RGB LED strips. In case you have RGBW ones (which is my case as well), you’ll need to pay attention to the terminals order when connecting it, as you’ll be taking the positive terminal in the middle of the other colors, but this nothing more than just a different order of wires.

The smaller brother of the previous dimmer with the pretty much similar functionality and controls is this 4 channel DMX dimmer. The manual it’s not consistent when it comes to the max output current, on one place they say say 4A and the other 5A per channel maximum. Nevertheless it is more than the 24ch model,  and twice the Loxone equivalent. On the other side, the Loxone 24V DMX dimmer is smaller in all dimensions when comparing these two, leaving you one free slot on the DIN rail per unit.

The menu and the functionality is similar with its bigger sibling, so the main advantage (at least for me) is the decentralized solution and usage of dedicated power supplies, that is matching my project structure. I am using MeanWell HLG series quite heavily, mainly for its safe and sealed chassis and high energy efficiency ratio. I do power off these PSUs when not used and what is also important here is that these DMX dimmers (both mentioned) do not blink or flash on its outputs when powered on and retain its setting stored. I am having four of these now installed and never had any issue since.

To conclude for both of these

Both of these 24V DMX Dimmers are good replacement for the former (and now discontinued) Loxone equivalents. There is slightly different rooting of the wires. Unlike the Loxone dimmer, the “Chinese” do offer terminals for DMX in and out. In the bigger version they go from the top continuing on the bottom side of the terminals, while the smaller 4ch version has all DMX terminals on the top. This makes it more difficult to swap these two on the DIN, as there is some quick rewiring needed. The terminal layout is also different on Loxone ones, the advantage I would pick here are the terminal connectors (Loxone standard), which makes in my opinion the installation a bit easier than using the fixed screws on the Chinese dimmers.

When it comes to the flickering visibility, in my opinion even the lower (500 Hz) refresh setting gives overall better result than Loxone’s standard. There is slightly different dimming curve when you switch between 500 and 2000 Hz caused by the LED turn-on time characteristics. But definitely better user experience when used with RGBW LED strips.

Finally, when looking at the configuration and overall compatibility with Loxone config, obviously you cannot search for these new dimmers. You need to add these manually (one easy click) and setup the proper channel for each new dimmer. But this is very easy routine with absolutely no hassle. More important is that these dimmers do work as the so called “Smart Actuators”, so you can enjoy full capabilities of color transitions and V2 light control block features.